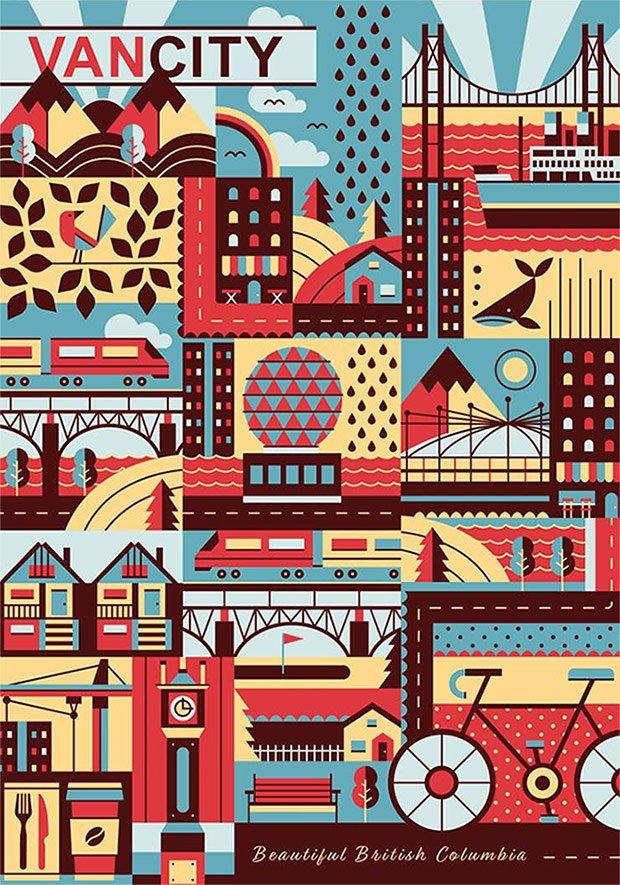 Great restaurant with a new chef to look out for

A trio of hispanophiles - legendary local barman Shaun Layton, Meat & Bread co-founder Frankie Harrington and former Clayoquot Wilderness Resort chef Justin Witcher - joined forces to create this good-looking, 60 seat homage to the food and drink of Spain in late 2018. Though the tapas classics are well-represented here (everything from patatas bravas and paper-thin jamon to stuffed olives and anchovies in oil), Witcher isn’t afraid to get a little playful with the milieu, with delicious results.

Great place for a working breakfast

The casually chic Chambar remains one of the most reliably consistent and lively restaurants in Vancouver, and very much in an elevated league of its own when it comes to business breakfasts, plating an inventive combination of Belgian, Moroccan and French cuisines in an airy and bright dining room. Aim for the exquisite waffles with lavender milk chocolate; fricassée of braised short rib with apple and smoked cheddar; and proper coffee. Request the relative privacy of one of the semi-circular booths.

This modern ode to the classic diner is the sister restaurant of Top Chef Canada runner-up Trevor Bird’s acclaimed Fable. It opens at 7:30am every weekday to a diverse crowd appreciative of the quick service and attention to detail on the plate. Expect indulgences like French Toast with nutella mouse and bananas next to old school standards like Trucker Breakfasts (bacon, eggs, toast, et al) and various expressions of Eggs Benedict. Oversized booths afford plenty of room for laptops, papers and elbows.

Great place for a business lunch

A multiple award-winning farm-to-table operation ideally situated for business lunches in the heart of the financial district. Cheffed by industry veteran Amanda Healey (she’s been toiling in kitchens since she was 14), the seasons-driven food concept cleaves deliciously close to the West Coast. Dishes like seared ling cod in squash brodo, smoked ham hock gnocchi, and roasted quail with quince chutney are served simply but elegantly to a bright and bustling dining room. Superb cocktail card built by Kaitlyn Stewart, one of the nation’s very best bartenders.

Though still young (opened 2017), this Pacific Rim–focused restaurant is already a fixed facet of Vancouver’s culinary firmament. It has also been quick to attract a business crowd at lunch, which is incidentally when all the defining greenery and details of the interior by Ste. Marie Art + Design show best. The menus change with the seasons but seafood will be a prudent choice year-round. Botanist’s cocktail program – overseen by internationally celebrated bartender Grant Sceney – is arguably the most avant-garde in the country right now, especially on the presentation front, while the wine list is loaded with hard-to-find vintners and vintages.

Great place for a business dinner

This jazz-inspired, second-storey Japanese-meets-Italian hideaway hybrid in Chinatown was named Canada’s ‘Best New Restaurant’ in 2017. It’s so refreshingly different that it’s nigh impossible to compare it to anything other than its nearby sister restaurant, the equally one-of-a-kind, Shanghainese/French informed (and multiple award-winning) Bao Bei. Slurp oysters, savour casarecce with pork and sake kasu ragu, sip on Singapore Slings, and take comfort in a room plucked straight from a style-soaked noir novel.

Vancouver is glad and grateful to young chef Clement Chan for graduating from his popular Le Tigre food truck to Torafuku, arguably the city’s most playful pan-Asian eatery. The clean-lined room can get loud and boisterous, but the atmosphere is an honest reflection of the exciting cuisine. Look out for the electrifyingly sauced General Tao’s Fried Chicken Wings and sake-kasu marinated halibut in dashi chowder. For some subtlety, try the Emarosa cocktail of strawberry-infused Gobernador Pisco shaken with lemongrass jasmine tea, lime and egg white.

Chef David Hawksworth’s second coming after the success of his high end, eponymous looker in the Rosewood Hotel Georgia. Set in the shadow of the Financial District’s forest of office towers, the new and voluminous Alessandro Munge-designed beauty might flirt with the whole of the Mediterranean, but its heart belongs to Italy. Indulge in proper pizzas and superb pastas, and seek out the little things like anchovy toasts and fava tips. The main floor lounge counts pols and power brokers as regulars, and offers the best drinks for many blocks around.

When this Indian food legend moved from its storied South Granville address in 2015 it landed softly in the shadow of Vancouver’s City Hall, where it (and especially its lounge) has become a magnet to those who frequent the halls of civic power. The menu remains as impactfully delicious as ever, with wine-marinated lamb popsicles in fenugreek cream still stealing the show. Bonus: After over 20 years of famously not talking reservations (making celebrities and heads of state wait in line with the madding ), bookings are now available.

The small bar at Gastown’s stylish L’Abattoir not only crafts some of the best drinks in the city but also attracts solo diners without reservations. Sip from well-constructed classics or new novelties made with the utmost integrity and care while digging in to owner/chef Lee Cooper’s refined, French-influenced West Coast menu. Always ask after the newest dishes, but for good reason Cooper’s elegant interpretation of Steak Diane has been on the menu since opening night in 2010. Secret weapon? Desserts.

Vancouver’s West End is home to dozens of Japanese ramen shops and fun, casual Korean eateries. This makes it the perfect hiding place for Espana, a critically acclaimed but accessible Spanish bar that works idiosyncratic magic with vernacular classics. Start with a chorizo Scotch egg or octopus conserva before finishing with the daily paella. English Bay beach is just at the end of the block, so a post-supper sunset bask is the thing to do if you can time it right. Oh, and there’s always an interesting selection of wines and sherries by the glass.

Great restaurant when you want to dress up for dinner

Though Vancouver has seen a general retreat from old-school fine dining experiences in recent years, there remain a few spots that are, thankfully, unshakable from their delicious formality. One of the most reliable is Gotham, a dark, voluminous steakhouse and cocktail bar in the heart of downtown. Staffed by white-jacketed career servers versed in the art of hospitality, the restaurant is a quiet, velvety respite from the newfangled. Though there is no dress code, its tomahawk steaks and slices of Key lime pie are best enjoyed when suited and bejewelled.

Offering refined Italian fare from hands-on owner/chef Pino Posteraro, Cioppino’s stands astride the milieu like a colossus. A genius with sauces and a master at understatement in presentation, the omnipresent Posteraro is also a magician with sourcing, always scoring the very best ingredients from his rolodex of suppliers. His bow-tied staff - many of whom count their tenure in years - are always looking sharp, so it’s always best to go in style.

Great place for a casual dinner with your significant other

From delicate, herbaceous rice-paper rolls filled with organic tofu, coconut and jicama to the variety of dizzyingly aromatic soups (aim for the meaty, citrus-lit, gently spiced Bún Bò Huế with broth-thickened vermicelli), the menu at Anh and Chi is a headily fragrant, mouth-watering study in discovery. The kitchen’s versatility and vision are what make this the most interesting, innovative Vietnamese eatery in Canada, but its secret weapon is its interior. Bright and brassy with stained glass, elaborate tiling and intricate woodwork, it is one of the most design-savvy rooms on the city’s hip East Side.

This celebrated Chinatown restaurant serves some of Vancouver’s most emblematic food from a creative menu of homey, French / Shanghainese shareables. Think steamed mantou buns stuffed with curried beef; petits cadeaux dumplings loaded with fennel; marinated eggplant zinged with soy, ginger and garlic; and the always changing “kick ass house fried rice” (which, at the time of writing, sees prawns tossed in a spiced clam-and-jamón sofrito with crispy ginger, black bean and pimenton). Every ambitious, aspiring restaurant in Vancouver still measures itself against Bao Bei in private moments of doubt. Through its first decade, scant few have emerged as anything approaching its equal.

Owner/chef David Gunawan’s charming South Granville locavore restaurant is as much an edible expression of Vancouver and its seasons as it is a reflection of the city’s easygoing, laid back attitude. The menus are constantly changing so as to accommodate the tasty things that local farmers and artisans bring to the kitchen door, and the wine program is all about low-intervention, natural, organic and biodynamic labels. The set menus are always the way to go.

The goal of Edible Canada has always been to introduce locals and visitors alike to the wide variety of ingredients and culinary traditions that together make up the perpetually moving target that is “Canadian food”. One can feast on elk tartare; poutine made with real Quebec cheese curds and sauced with duck gravy; crispy Humboldt squid, wild local salmon and so much more, all within steps of the Granville Island Public Market.

Recently renovated and rebranded, this centrally located boutique hotel originally launched as a 76-room motor inn back in 1956. Today, it strikes a stylish balance between modern and retro cool, offering free WiFi, Nespresso machines and a breezy, tropically transportive courtyard (with Ping-Pong table, palm trees and firepit), not to mention access to delicious main-floor outposts of Elysian Coffee (one of Vancouver’s best roasters) and Burgoo (comfort food).

Located opposite the Vancouver Art Gallery, this iconic, 90 year old pile was completely transformed in 2011, elevating it to new heights of luxury and comfort. It is home to the award-winning Hawksworth Restaurant, the stunning underground Prohibition cocktail bar, a hidden lobby bar (for those who don’t want to be seen), the always humming Bel Cafe and a dreamy, open-air terrace bar and lounge accessed via the fourth floor.

Anchor yourself at this boutique address in Coal Harbour, a sleek bastion of style and quiet confidence among the city’s characteristic spires of glass and steel. From this base of operations one can run/ walk the nearby seawall and wander the foodie junction of Denman and Robson with an appetite. Bonus: superb French bistro fare can be had in the main floor restaurant, Tableau.

A great place for drinks after work

Josh Pape and James Iranzad’s woodsy restaurant on the edge of Gastown has never rested on its laurels, always changing up its menus to keep the staff challenged and guests interested. This extends to Wildebeest’s ever-evolving lineup of wines, beers and cocktails, many of which are on trend and on tap (often both). While it’s difficult to get a table without booking in advance, there is almost always a seat or three available at the long, 14-seat bar, the veteran tenders of which are well-versed in the subtle arts of the Old Fashioned.

The lounge at David Hawksworth’s eponymous restaurant in the renovated Hotel Georgia (across from the Vancouver Art Gallery) is the new den of Vancouver power at repose. Low, whisper-friendly couches set in corner cloisters face fireplaces and an eight-seat bar. Snack on Korean-fried cauliflower, proper truffles fries and fresh oysters as you make difficult cocktail decisions. Try the refreshing Hotel Georgia, which sees a mix of Beefeater gin, lemon, almond, orange blossom and nutmeg shaken with egg white.

Great place to relax, eat and watch the game

Bells & Whistles is the latest restaurant from James Iranzad and Josh Pape, the duo behind Gastown’s acclaimed Wildebeest. Fun, irreverent, and wholly dedicated to beer and sports, it not only shows games on the big screen (they have two) with sound but they show due care and consideration to the quality of the food they serve, making it Vancouver’s best all-round sports bar. Get lost in the superb craft beer list while munching on garlic/parmesan fries, pineapple-sriracha chicken wings, and popcorn shrimp.