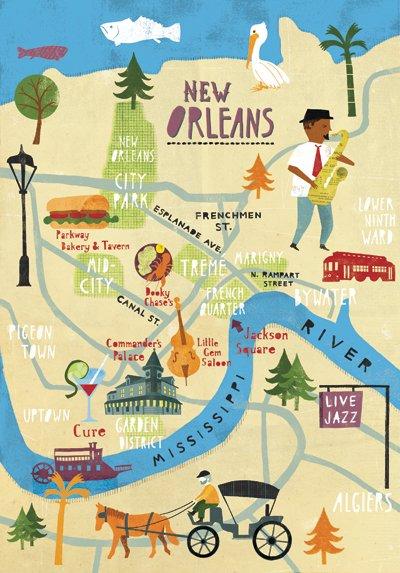 Great place to take a New Orleanian for dinner

The best restaurant in New Orleans today is Commander’s Palace, in the Garden District. Despite its longevity (it opened in 1880), its kitchen is on the front lines of inventiveness. The Chef's Playground menu is the way to go – seven or so courses mixing delicious risks and dares with the classics. Hard to come here and not have the turtle soup at the beginning and the Creole bread pudding soufflé at the end. The service staff is agreeably overmanned, the wine cellar distinguished and enormous, and the environment an antebellum mansion abutting a large, oak-shaded courtyard.

The historic centre of the city is also the centre of tourism, some of which can be crass. Yet when most local people think of a night on the town, the French Quarter looms large. The old restaurants (Antoine’s opened in 1840) hold a special place in a Creole homey’s heart. There is no rarer reservation than one for lunch at Galatoire’s the Friday before Mardi Gras. The last two years brought more major new restaurants to the French Quarter than in a long time. Doris Metropolitan is a new specialist in dry-aged steaks and chops, many in offbeat cuts. Kingfish is a cutting-edge Cajun place, with a staff of waiters with unique personal stories. And then there’s the reopening – to the tune of some $20 million – of the celebrated Brennan’s and its rightly famous breakfast.

The city’s bars embrace the renaissance in drink-making, and the trendsetter is Cure, on the burgeoning Freret Street restaurant row. Its owner is as much a chemist as a bartender. That inventiveness also shows up in the French Quarter at Arnaud’s French 75 bar and Richard Fiske’s Martini Bar and Restaurant, to name only two of a growing population.

\ Music rivals any other New Orleans pleasure. The clubs begin on Decatur Street, near the riverfront, where the House of Blues leads the league with name players from the worlds of jazz, gospel, pop and even some blues. The music spirals outward across the French Quarter into the adjacent Marigny. I like Kermit’s Mother-In-Law Lounge, Three Muses, and Snug Harbor Jazz Bistro. All these have food, but the venue combining eats and music best is the Little Gem Saloon. In the heart of the nearly-extinct South Rampart strip, where jazz was born, the Little Gem has two music-dining rooms, each with full menu and highly listenable jazz performers every night.

Begin amongst the handsome old homes of the Garden District, pass an ancient cemetery with New Orleans’s distinctive above-ground tombs, then head Uptown on Magazine Street. Magazine didn’t go under when Hurricane Katrina flooded 80 percent of the city in 2005. Its dozens of bars, bistros and shops were among the first businesses to return after the disaster and they have a style all their own.

The casual bistro scene is the strongest part of the restaurant experience. Mr. B’s makes the best versions of so many New Orleans dishes that it can credibly be said to have the best food in the city. The Pelican Club, La Petite Grocery, Clancy’s and Gautreau’s are others in the same category. Most of those are Uptown, but the hip Marigny and Bywater neighbourhoods (just downstream from the French Quarter) are full of adventuresome cafés in unique surroundings. Maurepas Foods has a fascinating, locally sourced menu that starts vegetarian but shifts to carnivory halfway. Not far away is Mariza, a with-it local take on Italian.

The best in this stratum are in Mid-City, up on the Canal Streetcar line. There we find Dooky Chase’s, where the brilliant, nonagenarian chef Leah Chase continues her reign as Queen of Creole cooking. Not far away are Katie’s, for plate specials and fried seafood, Mandina’s, for Italian and seafood, and the matchless Parkway Bakery & Tavern, famous for its Poor Boys.