Although from different hemispheres, chef Michael Hunter of Toronto’s Antler and two-Michelin star chef (and star of Netflix’s Chef’s Table) Alex Atala have much in common. “I met Alex in Australia,” Hunter says. “I get there and I see Alex getting off the plane with carts and carts of luggage with fishing equipment and I was like, this guy is cool!”

It was a natural connection. After coming together for dinners in Western Australia, Miami and Atala’s native Sao Paulo – our friends at Audi recently brought them together for the Audi Sustainability Dinner in Toronto’s Little Portugal for an evening that celebrated the chefs’ passions for foraging, hunting, fishing and sustainability. For Audi Canada President Vito Paladino, the German car manufacturer wanted to bring the two chefs together to celebrate sustainability in a different way –  through culinary creativity. “Our commitment to sustainability and electrification is something that is very important to us at Audi. It is something that we believe is the only way forward.”

Before guests were served a four-course meal that included wild-caught B.C. halibut and Ontario duck, along with dishes such as Brazilian tapioca and wild leek Vichyssoise – we caught up with the two chefs to discuss what they’ve taught each other, taking care of the environment and Michelin coming to Toronto. You’re both interested in hunting and fishing and foraging and having a natural relationship with the land and animals. What have you learned from each other?

You’re both interested in hunting, fishing, foraging and having a natural relationship with the land and animals. What have you learned from each other?

Alex Atala: For me, it’s not only about hunting or fishing or foraging. It’s about the right ingredients and what you put inside of you. Why do people choose the best shampoo? The best gasoline for your car? The first thing for a chef is to make delicious food. You will never make delicious food with bad ingredients. You will never have delicious ingredients if the environment [is not taken care of]. The food chain is powerful. It's even more powerful than social media. [laughs]. What links and connects 7 billion people on planet earth? It’s food, my friend. Facebook and Instagram doesn’t have that reach.

So [Michael and I] have the same values…bigger than expected in a delicious way [laughs].

Alex – your institute in Brazil, Atá, is focused on bringing awareness of wild ingredients. Where did this environmental awareness come from? Why is it important to you both?

Atala: The Amazon has the largest biodiversity in the world and tasting biodiversity can give this a new meaning. Our relationship with this huge biodiversity we share is an important way to save the planet.

Hunter: If we don’t take care of [the environment], it’s not going to be there. I want it to be there for my kids and grandkids. Take wild leeks, also known as ramps, for example.

There are places in Quebec for example where picking ramps is illegal because if you pick them all they are all gone. You can pick, I think it’s 10 percent of the patch and it can grow back. That’s a small example of education and being aware that we need to treat nature with respect and understand the ingredients and make sure they are there for the future.

On the other hand, we were picking garlic mustard today for the dinner. It’s incredibly invasive so you can pick as much as you want. It’s not native to Canada. It is taking over parts of the forest and choking out the native plants so that’s one you want to pick a lot of. The neat thing about our jobs is that it’s one of those things where you never stop learning.

It’s interesting to note that foraging requires just as much education as hunting, which you are quite passionate about, Michael. Even when done correctly and lawfully, hunting is often looked down on. What are your thoughts on that?

That’s where we came from as people: as foragers and hunters. Now we have the luxury of farming, gardening and going to the grocery store, but I teach my kids that meat doesn’t come from a Styrofoam package. Hunting is about conservation. I care about the conservation of these animals. Our hunting licenses and fees – that money the government makes goes directly back into conservation.

The wild turkey went extinct in Canada, for example, and in the ‘80s they reintroduced them and it’s one of the largest rehabilitation success stories in North America. They flourish in Ontario; their population is more than it ever was. I think people just don’t understand that yes, I’m a hunter, but I care a lot more about nature than they realize.

Alex, what do you appreciate about Canadian food? What has Michael taught you?

Atala: Seeing the relation between your own natural resources and how you evaluate it and how you are open for even opposite ideas is a new learning for me.

Of course, when we talk about animals, we talk about having compassion – it’s natural, it’s human, it’s emotional. As someone who lives in Brazil who lives nearby deforestation and sees firsthand how the culture of money disrespects our natural resources and sees animals suffering … so I hope to bring back how we can share what I’ve been learning these days in Canada to my country and my people and bring a beautiful message.

Michelin is coming to Toronto. Alex, you have two Michelin stars at Restaurante D.O.M. . Any advice for Canadian chefs?

Michael, what do you think about the news?

Hunter:  I think it’s great! For me, as a Canadian chef, what I love about what Alex has done in Brazil is define Brazilian cuisine. As a Canadian kid I wasn’t able to go and stage in France and Italy and work in Michelin star restaurants. The fact that it’s coming here is very exciting. We have such a vast, multicultural city here in Toronto for example – it would be cool if more restaurants will push the boundaries of our country’s cuisine. 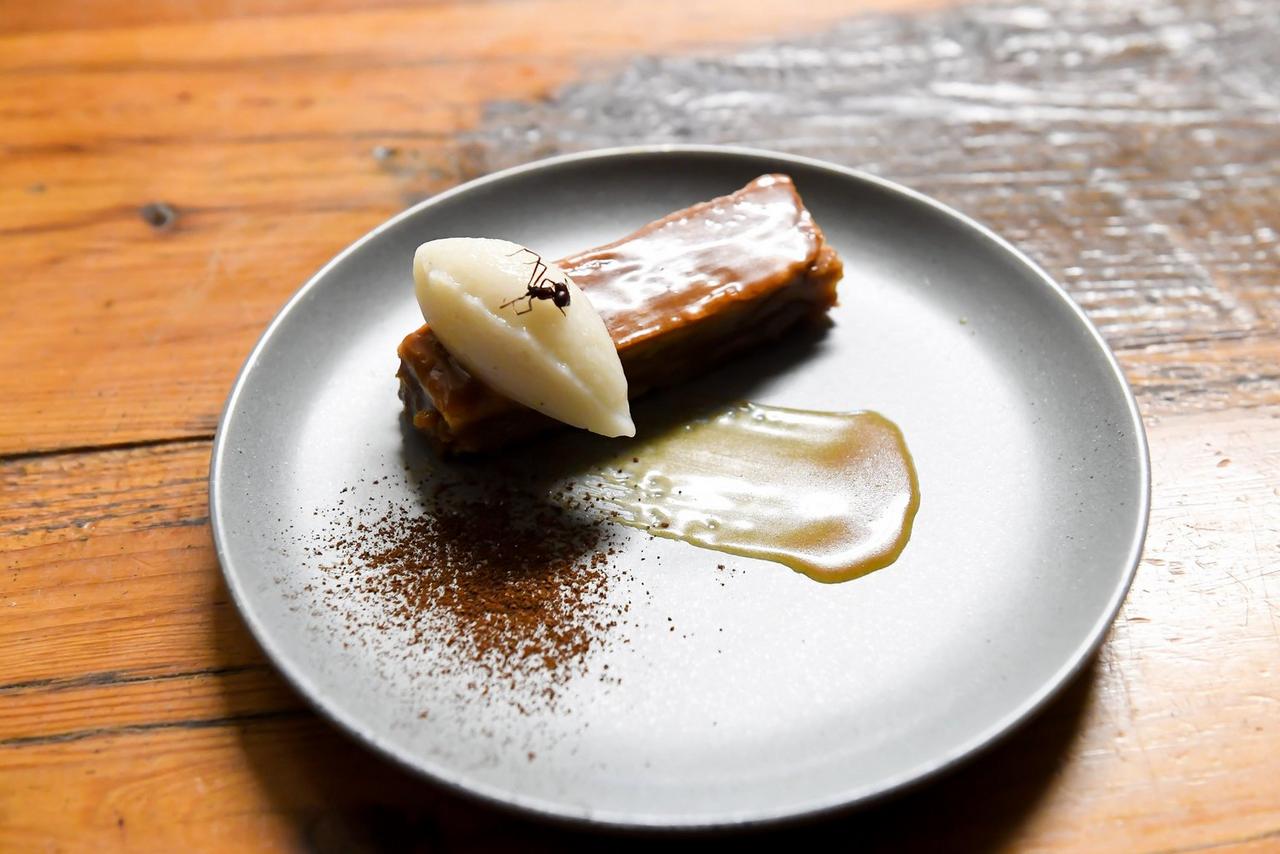 What can you tell me about the menu for the dinner you’re preparing together?

Hunter: It’s all about pairing Canadian and Brazilian cuisine. It’s a fun coincidence that we’re in little Portugal. Alex has brought some amazing ingredients from Brazil that are new to me and I got to spend some time in nature with Alex and show him some of the ingredients I’m passionate about.

Alex: As a Brazilian, I bring original flavours to share with people and make people dream a little bit about my part of the world!