Bring Back the NBA’s Dress Code… for Coaches

We beg you– save the polos and zip-ups on the practice courts and suit up when it’s game time.

On November 19th, 2004, the Detroit Pistons were trailing the Indiana Pacers by 15 points with under a minute left in the game. Pistons centre Ben Wallace was fouled hard by Pacers forward Ron Artest. In the seconds that ensued, a brawl between the Pistons and Pacers broke out, eventually spilling into the stands, where Artest shoved a fan who had thrown a drink at him. By the end, of it all, fans and players had come to blows and the NBA was dealing with a potentially calamitous situation: five players were facing assault charges, a game had been prematurely called off, nine players were suspended for a total of 146 games, and everybody, from diehard basketball fans to people who never watched games, had this as the scene that came to mind when thinking about the NBA in the mid-aughts.

In response, the NBA beefed up security at games and started limiting the sale of alcohol to fans—a pair of sensible decisions. One of the most curious responses, though, came in the form of an Association-wide dress code for players, a first for a major professional sports league. Introduced before the 2005-2006 season, the dress code saw players instructed to wear business casual clothes while arriving or leaving games or when conducting official league business.

The dress code faced tremendous backlash and rightfully so. Not only did many—most notably Allen Iverson—feel that it limited players’ ability to express themselves through clothing, they also felt that there were racist undertones to the guidelines: predominantly Black hip-hop culture and the clothes associated with it were cast as irredeemably bad and, in the context of the Malice at the Palace, as the root of the NBA’s image problem.

In the last few years, the NBA’s dress code has become less contentious. For one, almost all of the players who were in the Association when the dress code was introduced during the 2005-2006 season have since retired. Those who are currently playing have only ever known the dress code and the players have even come to embrace it. The likes of LeBron James and Dwyane Wade normalized having fun with suits by incorporating bold colours, daring cuts and even the occasional head-to-toe Thom Browne look. Meanwhile, a new commissioner at the head of the Association combined with evolving style around the world has led to a relaxing of the dress code, with more casual designer wares deemed acceptable. The eclectic mix of personal styles and the players’ star power has turned the tunnels of NBA arenas into one of menswear’s new frontiers, where sneaker collaborations, the latest designer streetwear, high-end fashion and suits are all put on show for the world to see.

Amidst all of the change with what the players were wearing, one thing has remained relatively constant: coaches continued to wear suits—not always with a tie and not always good ones, but, still—as they had since the NBA’s early days.

That was until COVID-19 happened and the Association went into its proverbial and literal bubble, allowing players and coaches alike to wear, essentially, whatever they wanted. For coaches, that meant the kind of soft clothes they’d usually wear to practices or pre-season games: a quarter-zip team-branded sweater with khakis or – for the truly daring – a team-branded polo with khakis. Were it to be temporary, it made sense. Everybody else was working from home in decidedly more casual wares, and the seats behind the coaches were empty—frankly, suits and ties would have looked a little out of place. That argument held for last season, too, as teams returned to their home arenas—some empty, some partially filled, some mostly filled towards the end of the season—and the NBA afforded coaches one more season of slacking off.

At least it was supposed to be but the one more season. Except now it appears that another season of slacks, ill-fitting polos and cottage-ready zip-ups is on the horizon, with the NBA giving coaches permission to stick with the laid back look.

The NBA has a long history of stylish coaches and the thought of that being a thing of the past is unfortunate to say the least. 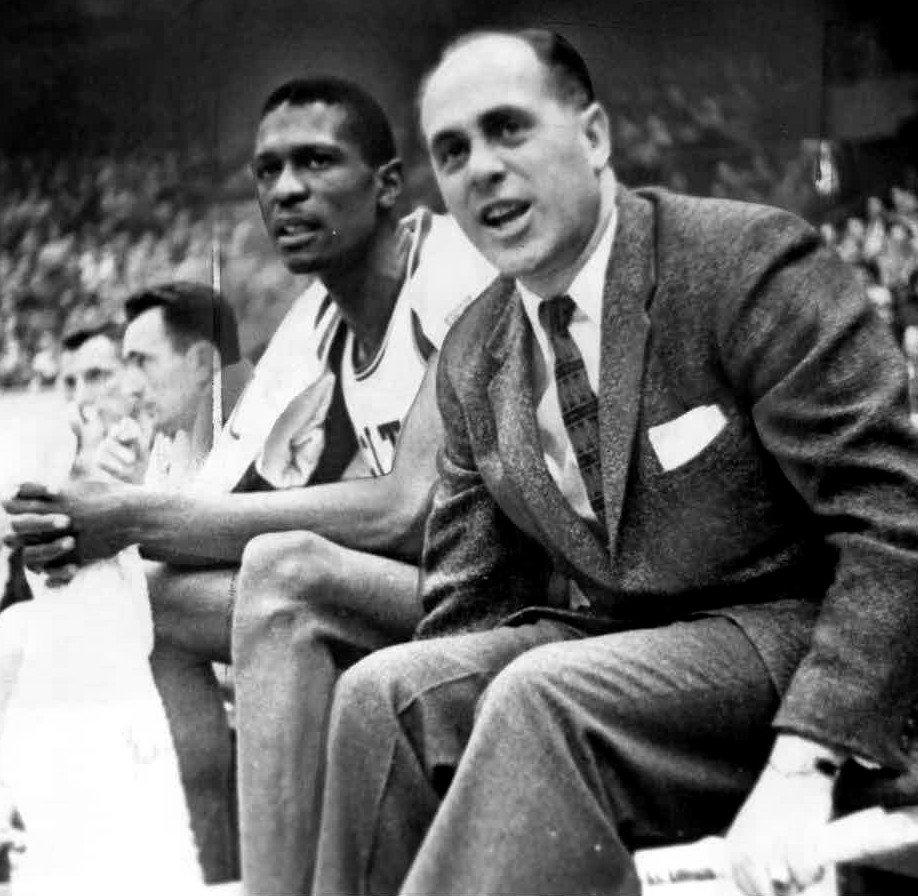 The late Red Auerbach, legendary coach and president of the Boston Celtics, was famous for winning, but also for his cigars and his suits, which, together, gave him an inimitable, effortless style. Auerbach showed up to games, literally and figuratively. He donned loud checked suits, preppy tweeds, and even the occasional three-piece, with pocket squares and tie-bars worked in. Auerbach looked like he meant business and there’s something inherently romantic about the pictures of him barking instructions to his players or celebrating yet another championship, in his suit.

Of course, in the ‘50s and ‘60s, everybody was wearing suits, even many of those in attendance. But Auerbach sported his with panache.

Pat Riley, on the other hand, brought the Armani power suit to NBA benches in the ‘80s and ‘90s. Riley owns what is arguably the biggest personality in NBA coaching history. Phil Jackson might have the triangle offence and obscure zen sayings—and, sure, quite a few championships—but Riley has always been the superstar coach and executive, taking only the glitziest gigs: the Showtime Lakers, the bad boy Knicks, and the Heat, where he eventually shaped the future of the Association by bringing LeBron James’ talents to South Beach and ringing in the super team era. Riley won, but he also sold; his teams were successful on a sporting and commercial front and he was a big part of that. The Showtime Lakers may have had some of the best talent in the Association, but they became the Showtime Lakers in large part because of Riley, who patrolled the sidelines in perfectly tailored Armani suits and meticulously slicked-back hair. Riley had swagger—some might call it arrogance—that was contagious to his players and the teams’ fans. 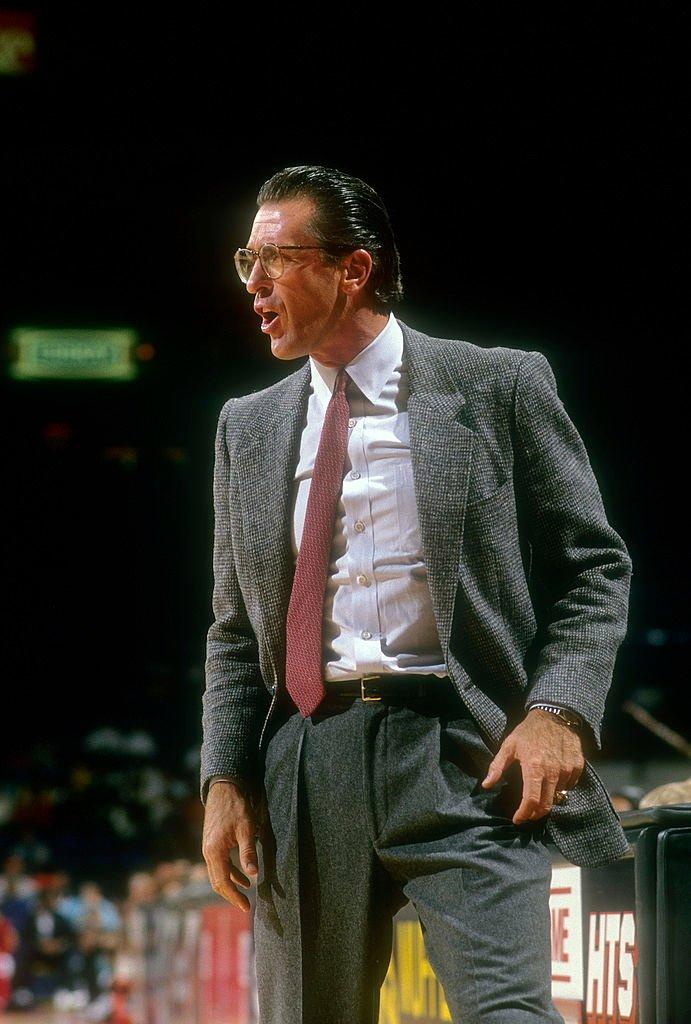 Whether a coach is wearing a suit or not won’t necessarily change the on-court product—but maybe it does. Maybe it shows players and fans that, like Auerbach and Riley, a coach means business—that they’re a cut above the coaches in high school and college gyms—and that they’re there lead and they’re there to win.

What it does change, however, is perception.

I want to remember Gregg Popovich, and his coaching genius, as someone who wore suits—even if they weren’t as flashy as Pat Riley’s or as timeless as Red Auerbach’s—rather than an untucked Spurs polo. Nick Nurse brought an NBA championship to Canada while wearing smart, modern tailoring that was, at times, irreverent. It reflected the organization: young, calculated, sharp, but still fun and easy on the eye. That’s what I want to remember. What I want to forget is the polo and khakis Nick Nurse and the Raptors that languished on the edge of the playoffs while playing away from their home arena during the pandemic.

There’s something anticlimactic about NBA coaches in slacks and polos—you expect them at pre-season games or practices, but not in prime-time when the Raptors are hosting the Bucks with home court advantage on the line.

So, please, to the coaches of the NBA: leave the polos and zip-ups on the practice courts and show us that it’s time to put our suits back on when it’s game time.