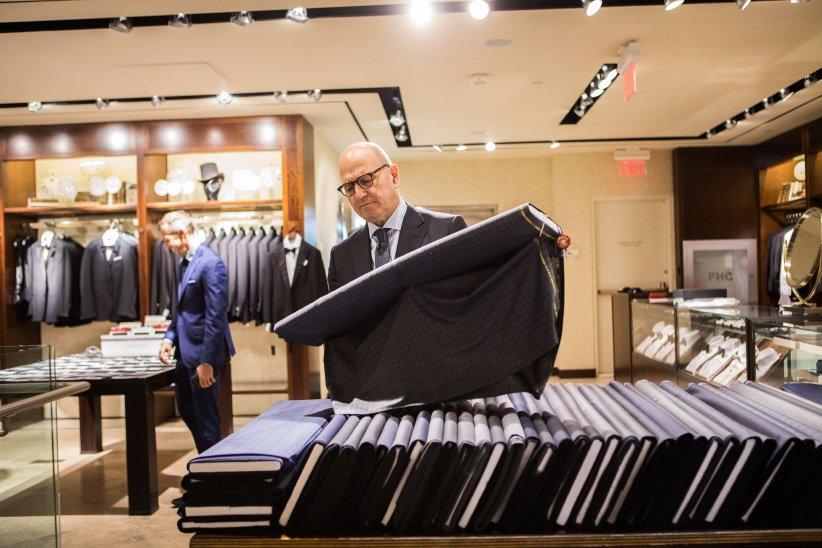 This month, Maclean’s magazine put a spotlight on Harry Rosen with an in-depth article that quoted CEO Larry Rosen as well as experts from Deloitte and retail marketing consulting firm J.C. Williams Group.

We’ve provided an excerpt below.

Simply put, Harry Rosen sells high-quality clothes to Canadian men. That fact remains true even as everything else changes. “Our focus has always been on renewal,” says Larry Rosen, “and figuring out: how do we speak to that new generation of men?”

A father to three sons, ages 25, 27, and 29, Rosen is both familiar with and intrigued by the Millennial generation. “In the old days, men wore a uniform to work,” he says. “They had their suit wardrobe, their ties, their white shirts, their black dress shoes. It was very unimaginative. Today’s men dress much more eclectically.”

But Harry Rosen hasn’t idly watched the industry change. It’s always been at the forefront of retail’s evolution.

Larry’s father, after whom the company is named, started the business as a small boutique in Toronto’s Cabbagetown, a neighbourhood then considered the outskirts of the city. It was 1954 and fashion was changing. Style-savvy men in Europe and New York were donning suits with more natural shoulders, and Harry Rosen wanted to bring that look to Toronto. “All the young advertisers and executives wanted that, and they all flocked to this out-of-the-way store to get it,” says Larry Rosen. “My father built the reputation back then that we still have today.”

That reputation allowed the company to tailor itself a space in a competitive market. “One thing I like about Harry Rosen is that they’re very clear about what they are. They are Canadian men’s fashion. Period,” says Mark Whitmore, managing partner with Deloitte, who worked with the company through his firm’s Best Managed Companies in Canada ranking. Harry Rosen is a platinum winner in the program, a distinction reserved for firms on the list for seven or more years. Part of that clarity was learned by trying, and failing, to be something else. In the ’80s and ’90s, Harry Rosen branched into U.S. markets and women’s retail. After both moves flopped, the company regained focus. “They don’t stray too far from their roots, and yet they’re not standing still,” Whitmore adds. In fact, the company is keenly aware of its competition and where the market is going, and adjusts accordingly.

For example, Harry Rosen has expanded its inventory over the years to include more than formal business attire. Suits are now about half of the company’s sales, while the rest is more casual garments like jeans, T-shirts, and hoodies. They were among the first luxury retailers to sell online, starting back in 2009, and have recently integrated a feature called Virtual Harry into their website, which lets online shoppers chat with in-store associates. “One of the biggest complaints of e-commerce is that it’s impersonal,” says Rosen. Online sales account for just two per cent of the company’s business, but Rosen notes that “there’s not an hour that goes by in our store without someone showing us our website on their iPhone and asking us where to find something on the floor.”

“The guys they’re up against are no slouches,” says Williams, “but they’re holding their own. I still think they’re the top gun.” Williams applauds the company for avoiding knee-jerk reactions in the face of new competition; moves like sourcing cheaper garments or slashing prices for promotions. “That’s the easy thing to do,” says Williams. “But they remain the top because they’ve acted like the top. They haven’t compromised on quality or done anything to diminish their brand.”

READ MORE
Indeed, quality is one aspect that Rosen refuses to change. The majority of the garments are made in Europe, with some from Canada and a small selection from the United States. “Our customer appreciates the craftsmanship, and he’ll pay a premium for a better quality garment,” says Rosen.