A Brief History of The Hoodie

How an essential piece of the modern wardrobe came to be

Cozier than a fleece blanket, cooler than a sweater, and infinitely versatile, the hooded sweatshirt has earned its place in the wardrobes of men around the globe. Despite its ubiquity, and the fact that it can be found in collections of pretty much every fashion brand at every price point, the hoody’s beginnings were surprisingly humble.

In 1919, the Feinbloom brothers founded the Knickerbocker Knitting Company in Rochester, NY. Collegiate athletics would boom in the 1920s and ‘30s, accompanied by a demand for the kind of tough, casual sportswear that could be worn both on the field and off. It was the beginning of the golden age of Ivy League style, and it was also the dawn of the hoodie. 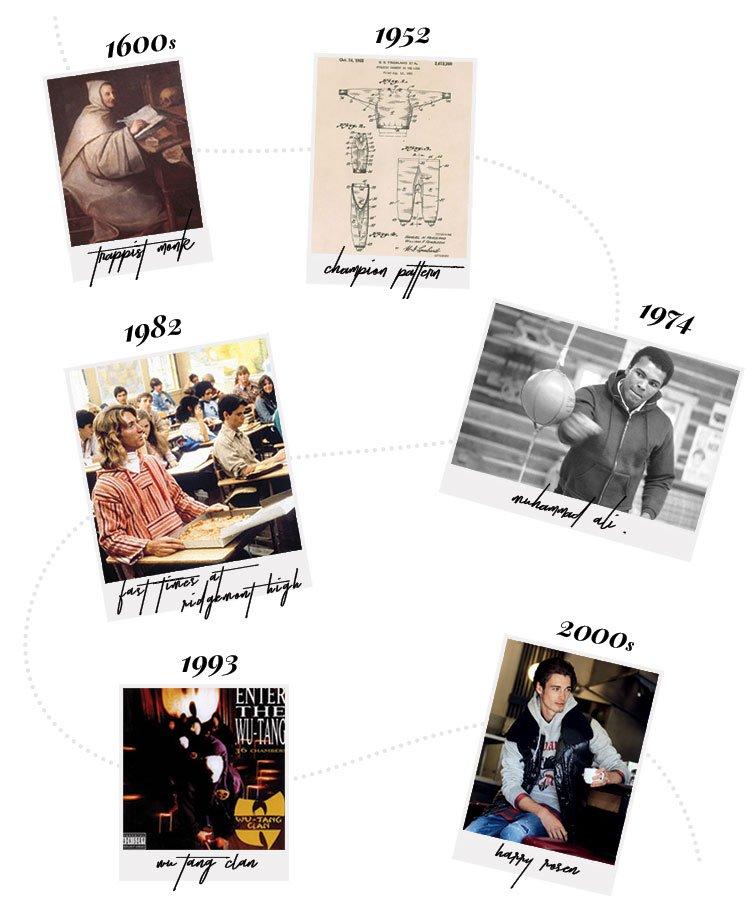 Tailors had understood the importance of hooded outerwear since medieval times, but a change in technology helped the Feinblooms adapt this ancient garment for modern life. In the 1930s the company, now rechristened Champion Sportswear, pioneered a new kind of “reverse-weave” cotton fabric that was thick, cozy, and—most importantly—shrink proof. This meant it could be washed and worn countless times, getting softer and more comfortable with every wear. Elasticated cuffs and a hood were added to keep the wearer warm and the modern hoodie was born.

Originally called “side-line sweatshirts,” the hoodie found a natural home in the world of sports. By the 1960s, thanks to legends like Muhammed Ali (who was often photographed training in hooded sweatshirts) hoodies became associated with the glamour and swagger of celebrity athletes. This image persisted through the next decade thanks to hoodie-wearing sports icons like Joe Namath and—most famously of all—Rocky Balboa. The hoodie, meanwhile, was being adopted by subcultures on both coasts, from the skaters of California to the graffiti artists and hip-hop pioneers of New York.

By the 1980s and ‘90s, as hip-hop and skater style began to have a major influence on mainstream fashion, hoodies came along for the ride. While the garment’s essential construction remained the same, much like the classic cotton t-shirt, it proved itself a uniquely versatile canvas for creative expression. By the early 2000s, designers were beginning to take things further still, re-imagining the hoodie in luxurious fabrics and elaborate prints. In 2004, Japanese streetwear brand A Bathing Ape released its Shark Hoodie, with a shark-mouthed hood that zipped all the way up. A few years later thanks to collabs with fashion brands like Vetements, Supreme and Off-White, Champion would cement its place in history as the creator of one of fashion’s favourite garments.

As the 21st century moves into its third decade, love for the hoodie shows no signs of abating. New takes from brands like Z Zegna, Reigning Champ and Canada Goose continue to push the boundaries of hoodie design, while evolving dress codes allow hoodies to be worn in combination with everything from jeans to tailored jackets. Nearly a century since its invention, the hoodie remains a champion of the menswear arena and shows no sign of slowing down with age.